Education, as with many things in life, is way too challenging to define. Sure you can look up the definition to learn that education is the process of receiving or giving systematic instruction, especially at a school or university. However, it goes much deeper than that. How can one truly educate a child and more importantly, allow them to be inspired and motivated intrinsically to learn? In essence, I'm referring to a portion of Chapter 26 of my book, Teach4Endurance: Surviving the Swim, Bike, and Run in Today's Classroom.

I am usually wary of "the next big thing" to enhance education. There are apps and gurus for everything under the sun. Some are flavors of the month, while others may stand time's test. It's the latter that I seek. I am looking for the Beatles and Rolling Stones regarding educational advancement; not bubblegum pop, which will be gone as quickly as it came.

You see . . . education is too difficult to say "this will work for all." Why? Well, there are far too many variables. Let's put this in perspective from something that stood out to me in a phenomenal book I read: The Great Unknown: Seven Journeys to the Frontiers of Science, by Marcus Du Sautoy.

If you have two die and you roll them, you have 36 possible future scenarios which can play out (see below).

Now, take my classes which typically range between 30 - 35 teenage students. Imagine that the dice are now 35 sided (numbered 1 - 35). Imagine the amount of possible outcomes! This is what an educator is tasked with regarding every lesson or assignment they give. Every possible variable cannot be accounted for. Human beings (and their daily lives) are far too chaotic.

So, how are we as educators to reach all of our students? That is the million dollar question. I can only speak on what I've learned over the past quarter century. Each of us have our own unique situations. Regardless, one way I have been successful in reaching all of my students is to think like a fictional author.

Ask yourself: When I read a novel, how does the author pull me into their story?

Luckily, as an author as well, I have an answer for you. They're called sensory details. These details which appeal to our 5 senses immerse us into an author's narrative thread, so to speak. Our senses are what allow us (as humans) to make sense of the world around us.

Let's look at two examples I've written and reflect on which story you'd prefer immersing yourself in.

Example 1: Seth looked out the front window of his house.

Example 2: Seth peeked out to a sliver of light coming in his family’s living room window. Could it be that his prayers have been answered? Daring to look even further, Seth slowly pulled the velvet curtains open. Powerful gusts of wind seemed to bring the endless rows of Maple trees to life, dancing along to and fro ringing a symphony of nature. The drizzle of raindrops and the aroma a fresh dew seemed to add to this orchestration, making the scene as a piece of art.

Squinting out the window, down the tree lined road, Seth saw it! Moving with eternal grace, it didn’t seem to walk; rather it glided in an effortless manner. Seth hoped against hope that he wasn’t dreaming, but something so gripping could only happen in the depths of the human mind. However, if this was real, Seth was truly home!

I'm assuming you'd choose the second example. If not, that's fine. In fact, it would be the easiest book I'd ever write! However, if you chose number 2, I figure it's because the short narrative brought you more into Seth's experience than the latter. THIS IS HOW I ATTEMPT TO RUN MY CLASSROOM. Any time I can bring in various sensory variables into a learning experience, I most certainly do.

One simple example is when my classes take part in a creation of mine regarding the mystery of the Dyatlov Pass. In short, the Dyatlov Pass incident details the mysterious deaths of nine ski hikers in the northern Ural Mountains (Russia) on February 2, 1959. This experienced group, who were all from the Ural Polytechnical Institute, had set camp on the slopes of Kholat Syakhl when it all went wrong. That evening something made them lash their way out of their tents from the inside and escape the campsite, poorly dressed for the heavy snowfall and freezing temperatures.

To investigate this mystery, the students analyzed various video game clips of my play through of Kholat. This video game takes a a fresh look at this enduring mystery through the eyes of a detective's investigations. One clip and activity has been provided below:

I remember my students always commenting on how my character, in the game, could only run so far until he was out of breath; needing to slow down. This was the perfect moment to immerse them into the touch sensory detail.

Since it was winter, we bundled up and went outside. I let them know, if they'd like, to go run through the snow and see how it feels. Obviously, with the cold air, heavy coats, and boots, they tired very quickly. LESSON LEARNED! They've officially been immersed into the story's setting.

After each of the video game clips and activities were completed, I told them there was one final catch. To see the game's final clip (and the game creators' take on the mystery), they had to complete a Breakout EDU task. As a group, they had to work together to get various locks off the box to obtain the USB drive which held the final video clip.

One of their 5 clue cards can be seen below:

The full experience can be seen below:

Finally, the final task was to immerse themselves into two of the world's greatest detectives: Sherlock Holmes and Dr. Watson. Their task was to develop a script, utilize clues and concepts learned throughout the entire experience and attempt to solve the case. Their presentations were to be recorded utilizing FlipGrid.

Below are some images from this fun and at times, hilarious experience. 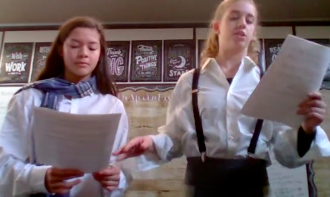 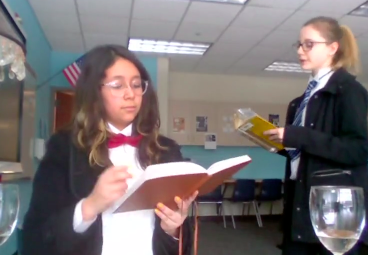 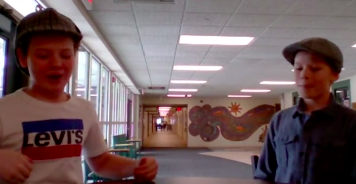 In the end, the students watched all the clips and voted for the one partnership they thought knocked it out of the park, both informationally and from an entertainment perspective. The result is that the winning team's class would have a pancake breakfast/brunch celebration . . . with me as the griddle master, of course!

When all was said and done, each of the 5 senses were appealed to and the student's learning and motivational efforts were through the stratosphere. At least for one unit of instruction, my work here was done.

To read more on this concept, check out Chapter 10: Reach for Greatness, in my book, Teach4Endurance: Surviving the Swim, Bike, and Run in Today's Classroom.

Take It Easy On Yourself